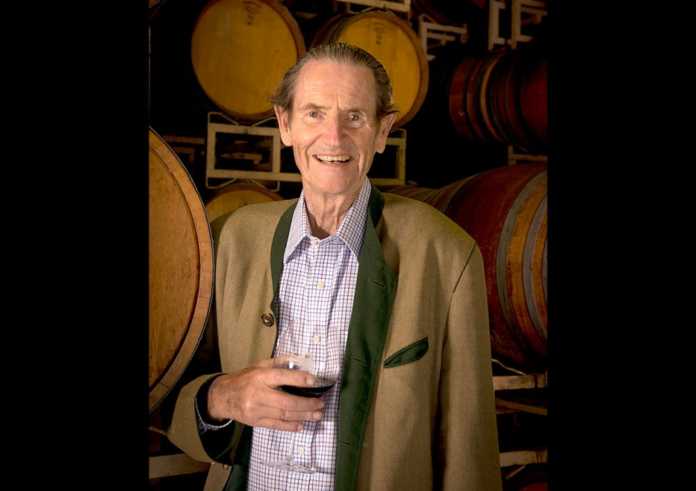 Before he was a vintner, Hahn was a successful business man in Paris, New York and London. He arrived in Monterey County in the 1970s in search of a new area to transform into an acclaimed winemaking region. In 1979, he purchased the Smith Vineyard and Hook Vineyard, which were planted to Cabernet Sauvignon at the time. The following year, the family made their first vintage of wine.

Hahn spent the next four decades dedicated to building a stellar reputation for what he identified as a unique winemaking area. The journey to making others see the same was not without adversity, but Hahn’s determination eventually led to consensus of the area’s quality among neighboring vintners and outsiders alike.

In 1988, Hahn rallied his neighbors on the eastern slopes of the Santa Lucia Mountains to firmly define and promote the quality and characteristics of the region. Their efforts were rewarded with American Viticultural Area (AVA) status for the Santa Lucia Highlands in 1991.

Today, the Santa Lucia Highlands is recognized as one of the United States’ top wine-growing regions, especially for Pinot Noir, with nearly 6,500 acres under vine in the compact 22,000-acre AVA.

Hahn’s accomplishments have been recognized by both neighbors and leading wine critics. Earlier this year, he received Wine Enthusiast magazine’s “American Wine Pioneer” Wine Star Award for his essential role in establishing the Santa Lucia Highlands appellation. He was the inaugural recipient of this award, which honors pioneers who paved the way for others in the wine business.

While Hahn started with Cabernet Sauvignon, he determined the area’s climate was not suited to the variety after examining research and drawing on winemaking experience. He decided to make a drastic change in the early 2000s, and quite literally “bet the farm” by replanting hundreds of acres of the family’s estate vineyards to primarily Pinot Noir.

That decision paid off, as Hahn Family Wines is now recognized as one of the top luxury Pinot Noir producers in the Santa Lucia Highlands. Wines that bear Hahn’s name are poured at leading restaurants and sold at fine wine retailers throughout the world.

“My father left me with one indelible lesson: there are many dreamers, but it is not enough to dream. We must also do, and that is exactly what he did,” said Philip Hahn, Nicky Hahn’s son and chairman of Hahn Family Wines. “He voyaged to California and created a new AVA, and there was nothing on this Earth he desired more than watching the grapes glisten in the sun setting upon that which he named the Santa Lucia Highlands. He built something truly meaningful, and I’m proud to carry on his legacy.”

Philip Hahn has provided leadership for Hahn Family Wines since 2007.

Today, Hahn Family Wines owns one of the largest shares of planted vines in the region, equaling more than 650 vineyard acres that range in elevation from 200 to 1,200 feet. The vineyards offer a diverse selection of terroir for growing Pinot Noir, Chardonnay and other grape varieties. The brands of Hahn Family Wines include Hahn SLH, Hahn, Lucienne, Smith and Hook and Boneshaker.

Nicky Hahn is survived by his wife, Gaby Hahn, and his two children, Philip Hahn and Caroline Hahn.

In lieu of flowers, the family has asked for donations in his memory to Oceana, a nonprofit organization dedicated to protecting and restoring the world’s oceans. Contact Laura Wright at [email protected] to make a memorial donation.

GREENFIELD — For the second time, thousands of freshly prepared meals were distributed to farmworker families suffering during the Covid-19 crisis on May 26...
Read more
Agriculture