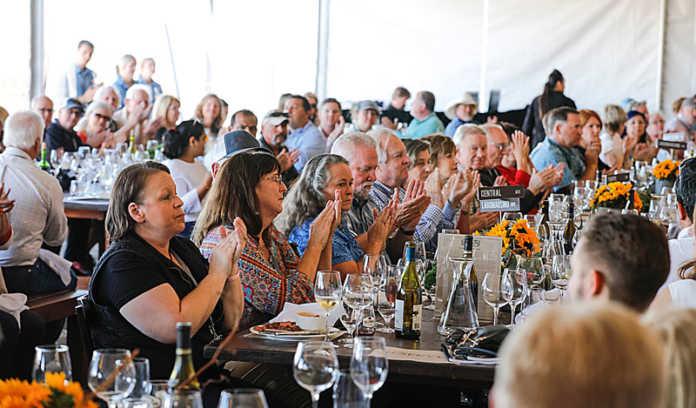 Celebration of a century

SOUTH COUNTY — Nearly 250 guests recently took a journey back in time to tour the properties owned by Salinas Land Co. and California Orchard Co. — located between King City and Greenfield — in celebration of the two companies’ 100th anniversary and their profound impact on agriculture in the Salinas Valley.

Board members, growers, dignitaries and invited guests gathered Sept. 22 in the Los Ositos Vineyards to commemorate the significant milestone of these two companies based outside of King City. The centennial celebration recognized their past achievements, current contributions to the community and the long-term sustainability of the land they own.

“Today is a celebration — 100 years is a big deal,” said General Manager Brad Rice. “Each one of you has been a part of this land’s history, and each detail of this event was carefully planned with intention. We want you all to have a great time today, but hopefully you walk away inspired.”

Although agricultural practices have changed over time, the family ownership has kept its roots in this land.

Both companies were founded in 1917 by Abe Hobson, C.C. Teague and John Lagomarsino. Over the past century, the land has produced bountiful harvests of table grapes, apricots, walnuts, pink beans, sugar beets, peaches, wine grapes and various row crops.

Today, the three families still own the companies jointly with other shareholders.

“This could not happen without the thousands of people who worked this land over the years,” Rice said. “Their hard work and dedication — from the field workers to the different growers and everybody involved — made these two companies a success.”

Butch Lindley was the master of ceremonies for the celebration, which included lunch with produce grown on the company grounds and wine from the surrounding vineyards as well as barbecued ribeye prepared by King City Young Farmers.

In addition, the ceremony featured the unveiling of a documentary video about the companies’ 100-year history in the area, the sealing of a time-capsule and presentations by state and local officials.

“The City of King is very proud for the recognition of historical achievement of Abe Hobson, C.C. Teague and John Lagomarsino, founders of the Salinas Land Co. and California Orchard Co.,” LeBarre said. “… Their dream has created opportunity for so many in the valley.”

A scholarship award presentation was also made to a local high school student.

Sean Nunez, member of the King City High School Future Farmers of America (FFA), was awarded a $500 scholarship from the two companies for his essay depicting what he thinks agriculture in the Salinas Valley will look like in the year 2117. Fellow FFA members Adreena Cortez and Hannia Zuniga each received $100 as honorable mention recipients.

“Through your hard work, creativity and knowledge, you have proven to be a student that the Salinas Land Co. and California Orchard Co. wants to recognize and encourage to continue your educational effort,” said Rice, in his congratulatory letter to Nunez. “Your essay was exceptional at capturing and portraying what the future of agriculture may look like in 2117.”

As the winner of the scholarship, Nunez was invited to attend the centennial celebration to receive his award and read his essay aloud for the audience. He believes farmers will be using vertical farming in the form of either hydroponics or aquaponics, with most being in greenhouses, and there will be less need for tractors and more need for robotics in the future.

“People will always need to be involved, but I think computers can enhance and improve the industry,” Nunez said. “I envision every farmer will have several drones with designated purposes. I believe we will develop an affordable robotics system that can pick and package the crops.”