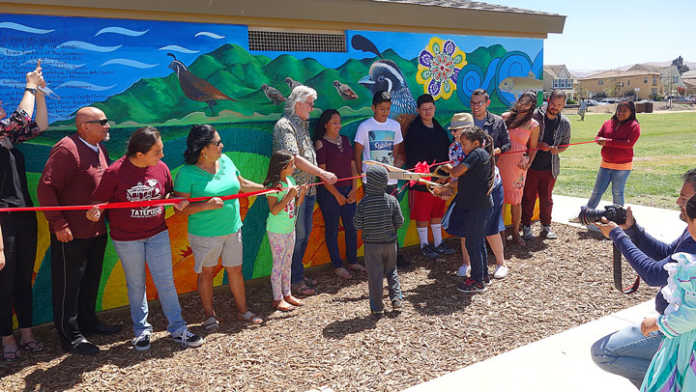 The hand-painted mural, titled “The Colors and the Life of the Wind,” features animals and landscapes with a bright color scheme and wraps around the restrooms at the park. Local artists Yermo Aranda and Carlos Villagomez created the design and oversaw the project, working alongside more than 35 youth from the Center’s summer art camp.

All the campers gave their input for the design, and about 18 helped paint the mural in just 10 days.

“The youth were proud and excited to be part of a public art project, have input into the design and painting of it and to work in collaboration with each other,” said Ellen Martin, executive director for First Night Monterey, which established the local Arts Center in 2014.

Youth learned about color, shading and how to use artist tools, such as flat and pointed paintbrushes. They also used watercolors and markers to create their own color studies and came up with the mural’s name.

“I was so proud to hear them praise each other,” Martin said. “… During the painting process, they worked as a team and at the end were so proud to see their names up on the side of the building.”

A ribbon-cutting ceremony was held Aug. 13, during which there was food, dancing and music to celebrate the mural’s completion.