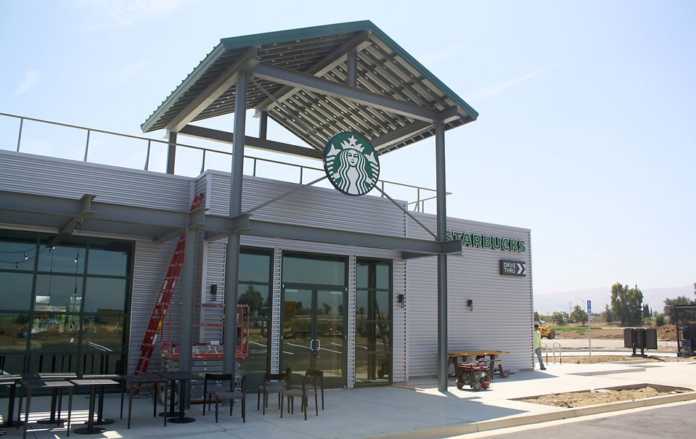 The Vines project is coming along

GREENFIELD — The Vines at Greenfield commercial development project is coming along, with a new Starbucks location opening in a few weeks and construction starting on fast-food restaurant Carl’s Jr.

“There’s a lot going on,” said Max Bacerra, developer for The Vines at Greenfield. “Starbucks is the first of the three retailers to have committed.”

Starbucks is just weeks away from opening as the parking lot was finished last week and striped on Aug. 20. The design is the first of its kind in California, according to Bacerra.

In this first phase of The Vines at Greenfield, construction began with Starbucks and will be followed by Carl’s Jr., which should be complete around December, and then Arco, which is anticipated for spring 2019.

“We tried to listen to the city needs, and they wanted a car wash,” Bacerra said. “So, Arco is going to get a car wash.”

The Vines at Greenfield is about 11.2 acres from Walnut Avenue along a new street between Highway 101 and Third Street, called El Paseo Way.

“The Vines at Greenfield is a highway, community retail commercial center that is going to be at a strategic location and have a nice ambience,” Bacerra said. “We want to create a Central Coast theme that is not too urbanized.”

The location near the highway allows for visitors to exit the highway and stop at The Vines at Greenfield for coffee, burgers, fuel and a car wash.

The shopping center also has a plan for a hotel chain, which is included in another phase of the development.

“The vision of The Vines at Greenfield is three-fold,” Bacerra said. “We wanted to create a hub for the residents of Greenfield and South Monterey County area. The second thing was to create a way station so that travels could have a nice place to stop. And, create a destination center.”

The Vines at Greenfield has a site location near the River Road Wine Trail and can draw visitors to Greenfield who want to visit those destinations as well.