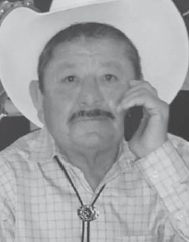 Quintil Otilio Cardona García was born in Coroneo, Guanajuato on February 12, 1946. He was one of 14 children of Juan and Jovita Cardona. He grew up in a small town, Altamira, located outside Jerecuaro, Guanajuato known to be an area for the rebel army during the Mexican Revolution.In

1962, at 16 years old, he altered his birth records to join the bracero program. He only participated in the program for one year. He vowed that if he ever returned to the U.S. he would do so in more human conditions. After returning home to Mexico, he moved to Mexico City. At age 20, he was offered a job with the Federal Government of Mexico. He was not very fond of that job and eventually left.

A good friend offered him a job as a truck driver. He worked for a Southern California grocery store “Shopping Bag”. At 23 he was responsible for driving cargo from Mexico to the US. As his job responsibilities increased, so did his route. On his days off he would visit Emilio Pacheco in Tijuana, MX. He was a familiar face from Guanajuanto. Quintil eventually fell in love with Emilio and Guadalupe Pacheco’s daughter, Angelina Pacheco Saldaña.

Quintil married Angelina on September 21, 1970. Since he was living in the US, he ensured Angelina also had a passport and the newlywed couple lived in San Diego for a few months. At this time, Shopping Bag had merged with Von/Safeway and management was not the same. His routes were getting longer and longer. Another friend offered Quintil a job as a lettuce cutter. At that time it was a very high paying job and since Quintil always loved working on the farm, he accepted. He moved his wife to Greenfield, CA. He convinced his wife by telling her he missed farming work, he loved it.

Quintil and Angelina lived in Greenfield for 29 years and had 6 children – Quintil, Sonia, Gladys, Juan, Isela and Denise. He also has 19 grandchildren and one great-grandchild.

Quintil and Angelina divorced in 2001. At that time he was working for Kendall Jackson until he retired. Angelina moved to Texas. Eventually most of the children moved to Texas, except Isela.

Quintil lived in Greenfield until July 2018. After having kidney failure and having to become a dialysis patient, his family decided it would be best if he was surrounded by more family. Since only one child was in California, Quintil gave Texas a chance. He was diagnosed with Lymphoma in mid May 2019 and passed May 30, 2019. He was surrounded by his children at the time of his passing.

Please join us for dinner immediately after Mass.