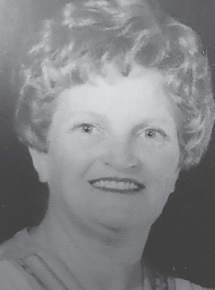 Lena was born in San Antonio, TX in 1930 and met Raymond Azbill in high school while her father was stationed at Camp Roberts in Paso Robles. They became King City residents when they bought a house in Pine Canyon in 1967 and remained there until they moved to Redding, CA at the end of 2018.

Lena and Ray were married 69 years. She and her husband were avid campers since Ray’s retirement as the local game warden in 1985 and they were members of the Good Sam camping club The Tumbleweeds.

She was an active Jehovah’s Witness since 1954 and loved to teach the bible to all those who would listen.

She is preceded in death by her daughter Cherry Griffith and son John (aka Bert) Azbill.

She is survived by her husband Raymond Azbill, her daughters Debra West and Laura Wagner, and her many grandchildren and great-grandchildren.

A memorial service will be held at Greenfield Kingdom Hall of Jehovah’s Witnesses at 251 Oak Ave. on Saturday, June 15, 2019 at noon.