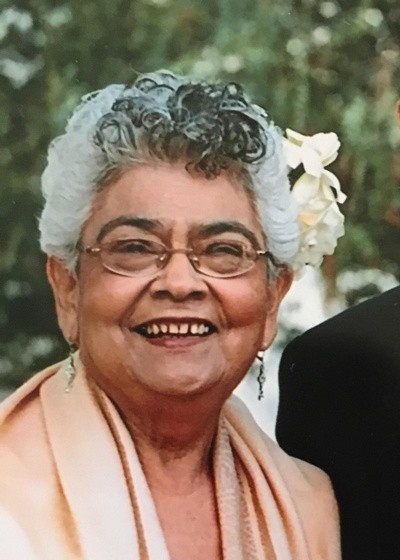 Angelita “Angie” Perez Huerta, 90 of Greenfield, California passed away peacefully on Sunday May 5, 2019 in the arms of her family including grandchildren and great grandchildren while in care at Eden Valley Care Center in Soledad, California.

Angie was born in Whittier, California, in the neighborhood of Los Nietos on October 1, 1928, the third child of six children of Eligio and Margarita Perez, who were from Aguascalientes, Mexico in the outskirt town of La Purisma of San Juan de Los Lagos. Eligio and Margarita migrated to the United States and due to work availability moved to King City California where Angelita had fond memories of growing up during a time when the population was only 1,300. Their family attended family picnics and barbecues such as the San Antonio mission days. Her family embraced this tradition and to this day continue this tradition by having a family reunion every August in King City California.

At a young age, Angie was often left in charge of the care of her home when her parents needed to go out of town to attend to family matters. She learned to drive at the age of 13 and at the age of 15 got a job at a local store/soda shop. Because of her responsible nature, the owner took notice and would often leave her in charge when he needed to leave town. That is when she met Juan Huerta, who visited the store for a “soda” and began talking/visiting her. She eventually gave him free sodas and their romance resulted in their marriage, a marriage of 67 years, until his passing in 2015.

As newlyweds Juan and Angie lived for a short wile in Hanford and eventually moved back to King City were Juan obtained employment with the Southern Pacific railroad and Angelita got a job with S and H Sugar, which allowed them to move to company housing. When they started to have a family Angelita stopped working to raise her children, but her work did not end.

Juan and Angie eventually moved to Greenfield California. where they lived the rest of their lives. Juan worked as a foreman for the bracero program at a farm labor camp. Angie soon became a cook for the farm labor camp in which she prepared meals for up to 40 workers. Due to her capabilities in management, people entrusted her with responsibilities. She was provided some assistance but she oversaw the menu and determined what would be cooked depending on what she was provided by the labor camp’s owner. The skills she gained early on from taking care of her siblings paid off.

Juan later worked at various community social activist programs and the United Farm workers. When her children were old enough, Angie returned to the workforce, where she worked for Cal- Com Pac, a produce dehydrator company in their lab and was a supervisor for 25 years. Once again, she used her management skills as she directed the employees she was responsible for. At home, she used her skills to direct her children to be on their best behavior, be lovers of Christ, and take care of each other.

Retirement could not stop Angie’s work. Juan became a skilled and popular tax preparer and notary. Together they were able to help many families. Angie worked setting his appointments, making copies, filing, paper shredding and chasing after clients unruly children who went after her calico cat Princie. Angie had no problem telling clients who insisted on last minute appointments that they would need to come another day, even though Juan could not say no to people in need. Angie was very protective of Juan due to his declining state of health.

Angie oversaw everything in her household like a tight ship. She wanted to make sure that her children, Irma, Angela, Henry, Frank and John and their families were taken care of. She was always on the go, washing and drying clothes for her grandchildren and making them food – always lending a hand and asking nothing in return.

Her home was spotless and meals were plentiful and delicious. After every meal she wiped down the dining room table with a rag and polished it with pledge. Angie did not even own a hamper because all clothes were washed immediately. Although Angie was vigilant person with the upkeep of her home, she still had a good sense of humor. Until the very end of her life, she was witty and quick with a quip. She was funny without intending to be. If she didn’t like your new haircut, she would let you know. If she thought the food you labored hours to cook was missing something, she let you know.

She was an animated speaker. You could see her enthusiasm in her eyes when she told you a story that she knew you would find funny too. Or when she was sad, you could here it in the lowness of her voice.