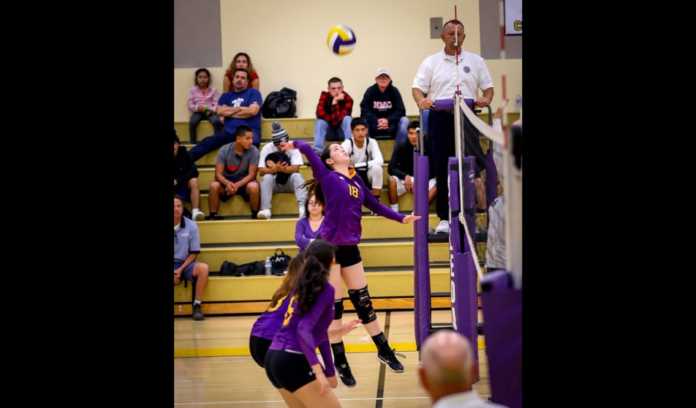 GREENFIELD — Greenfield High volleyball team is 0-6 in the Santa Lucia Division as they were beaten in four games at home against the Trinity Christian Warriors of Monterey last Thursday. The Lady Bruins hosted Kirby yesterday and play in Santa Cruz against Pacific Collegiate tomorrow afternoon.

KING CITY — King City Lady Mustang volleyball is 3-7 in the Gabilan Division of the Pacific Coast Athletic League as they lost 3-1 last Tuesday to the visiting Notre Dame and 3-0 on the road on Thursday to the Salinas High Cowboys.

Grace Shepherd had 18 kills and seven digs in the game with Notre Dame and Nancy Andrade contributed with five kills, 15 digs and three service aces. Ivy Hearne and Kayla Silva combined for four kills, 10 digs and 23 assists. Alexia Hood had six digs and Jalen Mendez had one block, one kill and two digs.

King City played yesterday at home with Santa Catalina and will travel to Gilroy tomorrow to play the Cougars.

SOLEDAD — Gilroy Mustangs beat the Soledad Aztecs in three games to win their Cypress Divisional showdown in Gilroy. After squeaking out a 28-26 victory in the opening game, the host Mustangs defeated Soledad 25-20 and 25-10 in the final two games. Standouts in the game were Jazmine Aguilera and Olivia Fale.

Last Thursday in Soledad the Lady Aztecs down the visiting Anzar Hawks in three games, 25-20, 25-17 and 25-9. Jamileth Madgaleno had a good game as a middle blocker. Soledad is 8-2 in divisional play, good for second place behind Gilroy and 10-8 overall. The Lady Aztecs were on the road yesterday in Watsonville and will travel to Pebble Beach tomorrow for a game with the Stevenson Pirates.

Gonzales wins 2 in a row

GONZALES — For the first time this season, the Gonzales High varsity volleyball team won back-to-back games, avenging an earlier loss to Pajaro Valley and beating the North Monterey County Condors for the second time in divisional play. The Spartans rallied to beat the Grizzlies 20-25, 25-15, 25-20, 21-25 and 15-13. Last Thursday Gonzales traveled to Castroville to beat the Condors in four games.

“Amazing play and great support by the whole team this week,” said Gonzales head coach Desiree Baltazar. “We’ve been working on our finesse game. In this new league you can’t rely just on power for power. We are proving to ourselves that we can and will make our presence known.”