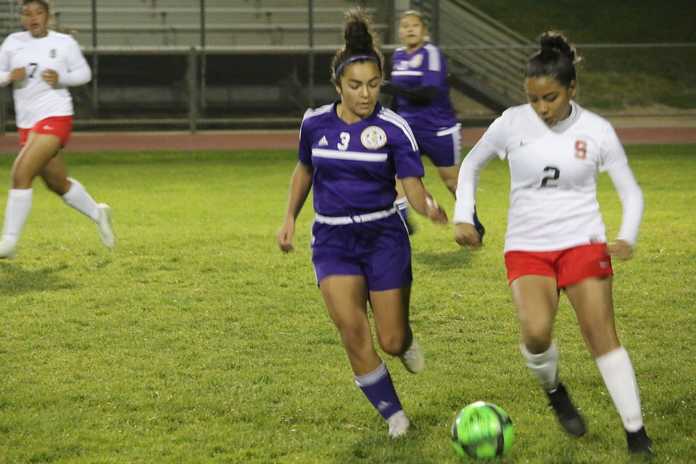 Soledad hosted the Seaside High Spartans and led the lead at 1-0 until the Spartans tied the contest in the final minutes of the second half. Micaela Mojica gave Soledad the lead at 1-0 early in the game on an assist by Monique Ascencio. Soledad head coach Maria Zamora praised her freshman goalie Suzanne Garcia for making saves and directing the defense. Zamora is in her first year as the head varsity soccer coach and fifth year as a Spanish teacher at Soledad High.

“I am the World Language Department Chair and teach all the AP Spanish classes,” Zamora said. “The department and the program are growing. Teaching and coaching are definitely my passions. I like taking challenges and my girls are very talented, so with a little motivation I’m confident that working together we can achieve great things.”

Greenfield hosted the Notre Dame Spirits last Thursday and played to a 4-4 tie. Karina Bautista had two goals, Julia Carrasco had one goal and three assists, and Lucero Martinez had one goal against the Spirits.

Greenfield is 0-1-1 in the Mission Division and 1-2-2 overall. The Lady Bruins played at Pacific Grove on Monday and host the Carmel Padres today. On Friday, Greenfield will play at Watsonville High against the Wildcatz.

Head coach for the Lady Bruins is Eliseo Ayala, who works as the in-house suspension monitor at Greenfield High School.

“This year we have a lot of new players on the varsity squad,” Ayala said. “We had 12 seniors last year and many of them were starters. We brought up about six girls from the JV team up to the varsity. We had three players that are first-year high school players make the varsity team. With that being said, I think we have a lot of versatility in the team and the girls understand the things that are being taught, such as positions, formations and ball-handling skills. This team is one of those where I, as a coach, am learning a lot back from the players. We have great communication, which helps when you coach because they help me understand their strengths as players, which in turn we can use in games. I’m sure we are going to learn a lot and have fun doing so.”

First-year King City varsity coach Claudia Rivas has been impressed with the play of Gaxiola and the rest of the Lady Mustangs.

“(Gaxiola) just took the ball and scored,” said Rivas. “I have high expectations this year. Our defenders Andrea Rodriguez, Yosselin Salcido, Karen Heredia, and our goalie Lesly Medina are becoming strong, fast, smart and are a strong wall against forwards. Jatziri Gaxiola is our top forward and she works side-by-side with Laileny Lopez Rodriguez.”

Rivas played four years of varsity soccer at King City with three years under Victor Chavez and one year with Etelvina Balcazar.

King City played on Monday at Carmel, will host Watsonville today, and travels to Salinas on Friday to play the North Salinas Vikings.