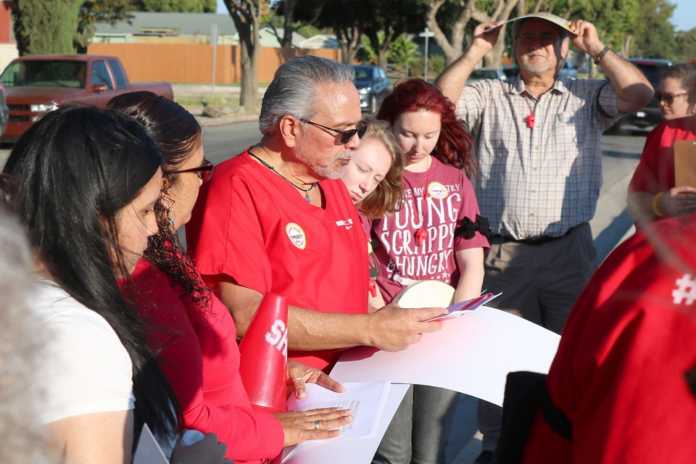 KING CITY — A group of registered nurses at Mee Memorial Hospital hosted a vigil last Monday evening to pay tribute to their colleagues who were recently laid off at the facility and alert the community about administrative changes they say are putting patient care at risk.

More than 50 people, including nurses, students and concerned citizens, participated in the two-hour peaceful demonstration Aug. 12 on the sidewalk outside the front of the hospital in King City. The demonstrators chanted, used noisemakers and held up signs to draw attention from passing drivers who honked in support.

“We have tried again and again to get hospital management to respond to our requests for information about the changes at the hospital, but they have refused to even respond,” said Porfirio Montoya, a registered nurse in the medical-surgical unit. “Because all our requests for transparency have fallen on deaf ears, we felt compelled to hold this vigil to make the community aware of our concerns for patient safety.”

Last month Mee Memorial Healthcare System, which operates Mee Memorial Hospital and three clinics in King City as well as one clinic in Greenfield, announced that it was laying off 43 employees in an effort to “reduce financial vulnerabilities and keep essential services in the community.”

The layoffs included support staff, such as medical interpreters, obstetric technicians and engineers, many of whom have worked at the hospital for years and even decades. Their final day of employment was Sunday, Aug. 18.

According to Montoya, the nurses rely on these healthcare workers to be their “safety net” between them and the patients, providing not only translation services for a mostly Spanish-speaking population, but also the extra hands necessary to meet patient care needs, such as helping them to the restroom or getting vital signs.

“It’s crucial for us,” Montoya said. “A large population that we serve is indigent and they’re Spanish speakers, migrant workers, and not every nurse is bilingual. I’m one of the very few bilingual nurses and a medical interpreter as well, but I can’t cover 24/7.”

“We serve a very high-risk population; mothers with chronic disease like diabetes and chronic hypertension. These are patients who are at risk for bad outcomes, so it is imperative that we have enough staff, yet we are chronically understaffed,” said Margie Saiz, an obstetrics nurse at Mee Memorial. “We are supposed to have three nurses on night shift, but we are constantly short. Newborns are very fragile and their condition can change very rapidly. What happens if there is an emergency and there is just one nurse on the floor?”

Montoya said nurses are being asked to work in departments outside of their experience, putting patients at risk. In addition, because of the lack of staff and recent unit closures, he said some patients are being cared for in units that are not suitable for their needs; such as pregnant women being treated in the emergency room and intensive care patients being cared for in medical-surgical units.

“In the OB department, we’ve had so many nurses just leave because they’re so unhappy with the short staffing. Some people are routinely being asked to work 18-hour shifts, which in itself is unsafe,” Saiz said. “There’s been times when we had zero labor and delivery nurses scheduled, so they’ve had to shut the OB unit down completely and labor and delivery patients had to be triaged in the ER.”

The layoffs and reductions in services have some fearing the hospital may be in jeopardy of closing or being sold.

Mee Memorial Healthcare System CEO Michael Hutchinson stressed that is not the case.

He added that the layoffs did not include any RNs and were a “one-time-only occurrence.”

Out of Mee Memorial’s 310 current employees, Hutchinson said more than 80 are “either qualified or competent to provide medical translation services to non-English-speaking patients.”

The nurses, however, are asking hospital management to host a town hall meeting to inform employees and the community about the recent changes.

“We have been trying to communicate with our administration for months now and they’ve been ignoring all of our concerns and refusing to meet with us,” Saiz said. “We want them to have a town hall meeting and to answer questions to the community as to why they’re shutting down all these services, why they have laid off almost 50 people. We want answers.”

Hutchinson said the hospital is planning to hold community forums on the “State of the Healthcare System” in September.