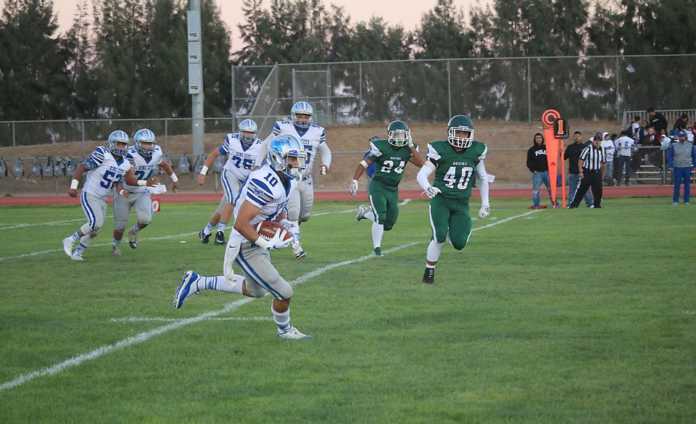 Photos by Michael Ramirez
Luis Briseno makes a break up field on his way for a 70-yard touchdown pass play thrown by quarterback Dylan Oliveros.

Below, King City’s Devin Morales picks off a pass for a 65-yard touchdown in the second quarter against the Bruins Friday.

SOUTH COUNTY — Two big plays in the first half sparked the King City Mustang football team to a 34-0 victory over the host Greenfield Bruins on Friday night in Greenfield. The game was the season opener for King City, while the Bruins lost their second straight non-league game.

In the first play of the game, Mustang quarterback Dylan Oliveros found teammate Luis Briseno for a pass play and the shifty receiver scored a 70-yard touchdown to give the visitors a 6-0 lead. Jonah Mendez went in to add the point after attempt but on the kick the Mustangs were penalized for a procedure call. After he was backed up five-yards, Mendez drilled the ball through the uprights to give his team a 7-0 lead with 11:39 to play in the first quarter.

Greenfield moved the ball on their first possession but had to send in place kicker Hernandez to attempt a long field. The ball fell short and the Mustangs took over on their own 32-yard line. Oliveros put his speed on display on first down as he called his own number and ran for an 80-yard score that was quickly called back on a penalty call.

The Bruins defense did tighten and had the Mustangs close to the fifth at fourth and 10. Oliveros fought to earn yardage but came up short and was taken down when he could not find a receiver open.

After the Bruins took over on downs Greenfield quarterback Daniel Mendoza had a pass picked off by King City defensive back Devin Morales and returned for a 65-yard touchdown on the interception.

Another PAT by Mendez made the score 28-0. Mendez used both legs to score points for King City as he completed the scoring with a 10-yard jaunt but was unsuccessful on the PAT for the final 34-0 tally.

“We just have to clean our play because we came in a little sloppy against Greenfield,” said King City head coach Mac Villanueva. “This week we play Carmel at home and they are one of the best teams in the area. For us to do well and compete we have to execute the game plan we already have in play. Carmel has probably one of the best defensive fronts we will see this season and they have been together for a few years. Defensively they can give up points and we are going to have to get our points because Carmel can put up points.”

King City finished the game with 402 yards of offense including 111 rushing yards by Oliveros on 14 carries. Oliveros also passed for 113 yards and finished with a six of 10 passing performance. Briseno led the Mustangs with three catches for 82 yards. Caleb Hood, Isaias Gonzales, and Morales finished with an interception.

Greenfield fell to 0-2 in non-league play under first-year head coach Adam Barsenas who saw some improvement in his team’s play.

“We feel that we can open up our offense and take pressure off quarterback Daniel Mendoza if we can run the ball well,” said Barsenas. “Jaime Soto had a good game for us at running back with 22 carries and 188 yards but we also had three interceptions and we hurt ourselves giving up a big offensive play right away and then threw an interception for another score.

In the junior varsity game, the Broncos defeated Greenfield by a 27-2 score. Felix Dominguez scored one touchdown on a fumble recovery and another on a running play. Ivan Lizardi ran in a score and Alexis DeDios caught a touchdown pass from Bronco quarterback Ryland Hindershied.

“Our players did well in their assignments,” said Bronco head coach Evan Petrovic. “Offensively we made mistakes and we had to clean those up for our next opponent (Carmel). Carmel will be one of the most disciplined teams that we will see on the field this year. This game will show us where we are and can be as football team.”