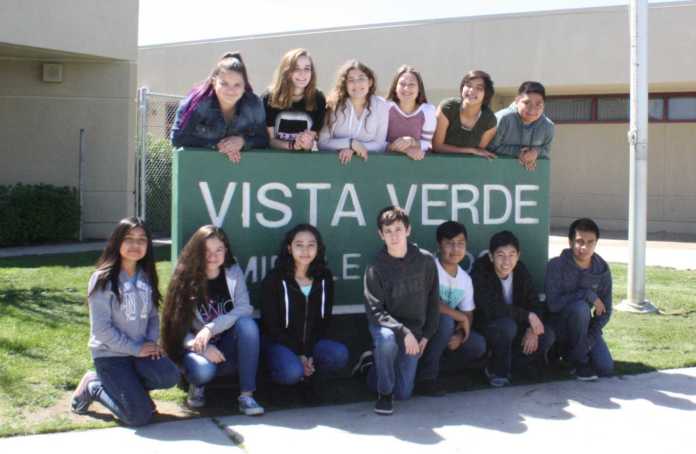 GREENFIELD — Vista Verde Middle School students competed in the Monterey County History Day on March 18 with two winners of the Rucker Award for Civil Rights and Social Injustice as well as Emily Rojas and Alberto Chacon were the County Winner of Military History Award and the Winner of the American History Award.

Rojas and Chacon will be headed to the state competition at Rocklin, Calif., in May. Their project was on the Harlem Hellfighters. The Harlem Hellfighters were the 369th Infantry Regiment of the U.S. National Guard during World Wars I and II. The Regiment consisted mostly of African Americans and a number of Puerto Rican Americans during World War II.

“I was stunned (when she found out about the awards),” Rojas said. “I was really critiquing my project, I didn’t really know if it was that good or if it was bad.”

Chacon was not there for the presentation of the awards because he was competing in a migrant speech on curfews.
The duo was also the Junior Group Exhibit winners.

The nickname was given to the Infantry Regiment by the Germans because of their toughness and never lost a man through capture, lost in a trench or a foot of ground to the enemy.

One of the Rucker Awards for Civil Rights and Social Injustice went to Guadalupe Rojas, who presented a project on Michelle J. Howard, the first female African American four-star admiral in the U.S. Navy. The second Rucker Award went to Ani Bacilio, who spoke about Mendez versus Westminister and ending segregation in Orange County schools.

“They were fighting about the Mexican schools because they didn’t allow Mexican children to go to the ‘white school’,” Bacilio said. “It was segregation in Santa Ana.”

When Bacilio found out that she had won the Rucker Award she felt proud of her accomplishment.

The students lined up to speak in front of three judges who asked questions about their history projects. The projects ranged from Muhammad Ali and his stance against the U.S. Government to the Harlem Hellfighters and many more. The Monterey County History Day event occurred at the Los Arboles Middle School in Marina on March 18.

“Our project was about how he (Muhammad Ali) stood against the Vietnam War because it was against his religious beliefs,” Alexander Hernandez said.

One of the interesting things Hernandez, Francisco Silva and Brandon Morquecho learned while completing their project was that Ali was forced to give up his boxing title because he refused to be drafted into the Army.

Vista Verde Student Mikayla Sargenti presented her project on Malala Yousafzai, who stood up to the Taliban and stood for equal education in Pakistan. Project interviews ranged between five and 10 minutes.

The Vista Verde students involved in Monterey County History Day are in the accelerated Social Studies class and began working on their projects over the summer. Students also worked on the project in class for three months to prepare for their final presentation on March 18 and represented a portion of their semester grade.