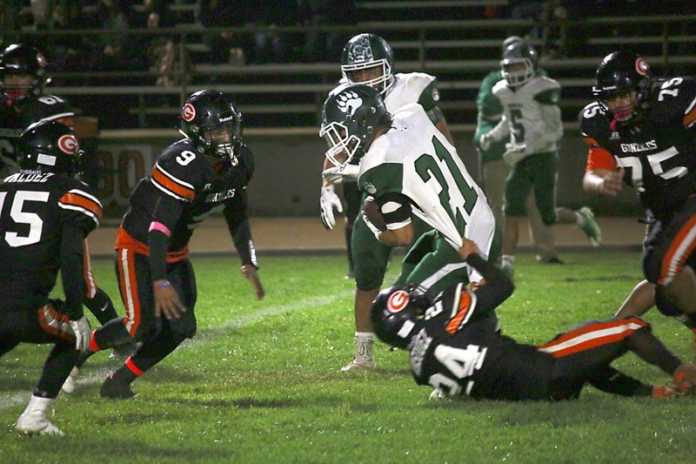 SOUTH COUNTY — An offensive show was displayed right out of the gate by the host Gonzales Spartans as they scored at will in a 62-7 Santa Lucia Divisional game with Greenfield High Bruins on Friday at Dick Force Stadium.

Gonzales held the Bruins on the first series on plays and Payton Flores started the fireworks with a 70-yard touchdown on the first play from scrimmage for the Spartans. Flores and his Gonzales teammates never looked back after that.

On their second set of downs the Bruins fumbled and the ball was recovered by Spartan linebacker Nael Vasquez. Flores did the rest as he ran for a 20-yard touchdown to put the home team up by a 13-0 score. Gonzales attempted a two-point conversion but the pass attempt fell short.

The Spartans stopped the Bruins on the next series and forced a punt to give Gonzales good field position. After a running play by Flores quarterback Raul Morales threw a pass to Alex Morga, who made a tough catch and scored on a 44-yard run.

The touchdown and a PAT by Frankie Cisneros had the Spartan up by a 20-0 score.

Greenfield gave up the ball almost at midfield when a fourth down attempt for a first down failed, giving the ball back to Gonzales. With running play by Flores and Morales earning yards the Spartans reached the red zone on four plays. Morales then threw a pass towards Morga who caught the ball for a five-yard touchdown. Cisneros then was perfect on the PAT and the score was 27-0. After the punt the Bruins attempted to use the passing game to earn some yardage and get back in the game. Quarterback Soto threw an ill-advised pass that was picked off by Jacob Amador who scored from 27-yards out. The fourth PAT by Cisneros gave the host a 34-0 lead.

The Gonzales defense led by Pablo Villansenor and Nael Vasquez made life miserable for Greenfield as they kept the Bruins from advancing the ball upfield and forcing the visitors to turn over the ball downs. Flores put on another display of speed and power with a 59-yard run for a score and Cisneros caught a pass from Morales for another score that put the Spartan ahead 48-0 with 31.2 seconds to playing in the first half.

“Even though we had the lead we were not going to stop running our plays,” said Coach Berlanga. “We work on our offense all week and we have to work to get better and to consistent.”

In the third quarter the scoring continued for the Spartans as Flores added a 68-yard touchdown run and Morales scored on a five-yard run. With 6:56 remaining to play in the third quarter Gonzales led 62-0. The Bruin avoided getting shut out as they completed a drive with a six-yard pass play from Soto to Jose Hernandez for a touchdown with 11:56 to play in the contest. Hernandez also added the PAT. The rest of the fourth quarter was played with a running clock.

Greenfield head coach Adam Barsenas had nothing but praise for the Spartans and their head coach Arthur Berlanga and was optimistic about his own team.

“Gonzales is just a good team that is on a roll right now,” said Barsenas. “Coach Berlanga has done a great job of coaching them up. Our team played hard but we went in with our best running back at the quarterback positon and it put a lot of pressure on him. This week we will try to mix it up a little more offensively. I am feel we are heading in the right direction because the boys are playing with pride and working hard.”

Soto rushed for 123 yards on 25 carries and passed for had a four of 12 passing performance for 51 yards. Soto

“Even though we had the lead we were not going to stop running our plays,” said Coach Berlanga. “We work on our offense all week and we to work to get better and to be consistent. I was pleased that we played well and that were able to get everyone of our players in the game.”

Flores had a record breaking night he finished with 293 yards on nine carries to pass Ignacio Guzman on the record board for yards in a season. Guzman had the previous record at 1,636 yards and Flores surpassed that with 1,643 yards left to play. Flores is now tied with 1967 graduate and Gonzales High Hall of Famer Joe Perez for 19 touchdowns scored in a season.

Morales rushed for 46 yards on four carries and had one rushing touchdown and was nine of 11 in passing for 147 yards. Jose Lopez added 35 yards on eight carries and Jayson Flores had two carries for 17 yards.

“We had told Payton that he was only going to touch the ball about 10 times in the game,” said Coach Berlanga. “After those two long touchdown runs he moved closer to the record. It was amazing that he was able to break the record on just nine total carries. On Saturday we will be playing Stevenson and they are 3-1 in league standings and we are 4-0. It is a championship game for us because if we lose they (Pirates), could be league champs too and we have worked for could be gone. It will be two straight weeks of playing Pirates for us as we end the regular season on Friday, Nov. 2, against the Harbor Pirates. Right now we want to think about playing each opponent one game at a time.”