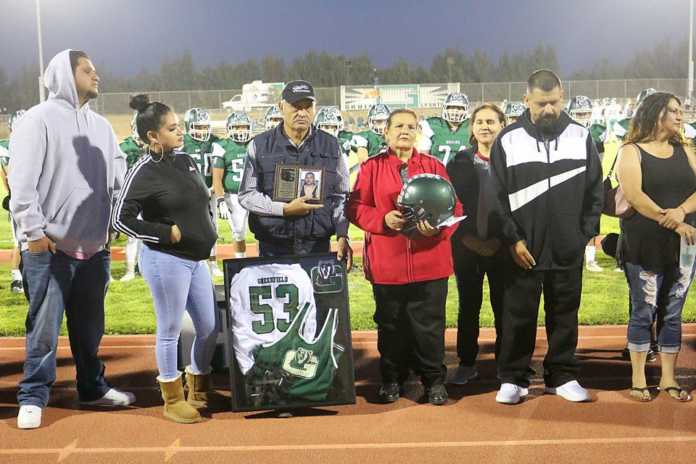 Photo by Michael Ramirez
Jose and Lilia Zavala of Greenfield were presented with a box containing their son Miguel’s game jersey, his wrestling singlet and a Bruins letter. Zavala’s number 53 was worn on the helmet of the Greenfield players on Friday.

GREENFIELD — After scoring just 14 points in four games, the Greenfield football team erupted for six touchdowns to down the visiting Harbor Pirates 42-7 in the Bruins Santa Lucia Division opener.

With Jaime Soto leading the running game with 176 yards on 19 carries, the Bruins rushed for 383 yards on the ground. Soto scored two touchdowns in the game and four other Bruins added touchdowns.

“It felt good to be on the winning side of a football game,” said Greenfield head coach Adam Barsenas. “We had five different guys run the ball and five receivers make receptions so it was a solid attack for us.”

Jose Hernandez kicked the first three Bruin point after attempts after the touchdowns.

Soto scored his second touchdown of game with a three-yard run in the second quarter and Raul Martinez scored on a seven-yard touchdown pass play from quarterback Daniel Morales to complete the Bruins first half scoring at 35-0.

Greenfield added a 15-yard scoring run by Jose Uribe in the final quarter and the Bruins allowed one touchdown by the Pirates for the final 42-7 score.

“Our line play was strong on offense,” said Coach Barsenas.

“The defense came up with interceptions by Raul Martinez, Sebastian Meza, and Daniel Gonzalez. Martinez also broke up three passes and led us with three tackles at safety.”

Jose Uribe contributed with 123 yards on 18 carries and Antonio Chiquito finished with 61 yards on seven carries. Quarterback Daniel Morales added 20 rushing yards and was five of six passing for 47 yards, one touchdown, and no interceptions.

Pass receptions were made by Alfredo Mendoza, Diego Velasquez, Raul Martinez, Andres Espinoza, and Sebastian Meza. The Bruins are 1-4 overall and 1-0 in the Santa Lucia play with game on Saturday in Pebble Beach with the Robert Louis Stevenson Pirates.

Just before the start of the varsity football game Friday, Miguel Zavala, a 2002 Greenfield graduate, was posthumously inducted as the first-ever Hall of Fame Athlete. Zavala, son of Jose and Lilia Zavala of Greenfield, was a three-sport athlete competing in football, wrestling and track and field.

Zavala was remembered as an “animal” on the football field by his coaches and teammates for his hard charging style and also won huge matches on the wrestling mats. Zavala competed in the throwing events as a member of the track and field teams and is still on the Bruin record board as a shot putter.

While beginning his Marine recruit training in December 2002 at Camp Pendelton, Zavala died of Strep A after experiencing pneumonia-like symptoms. Zavala was just 18 years old.