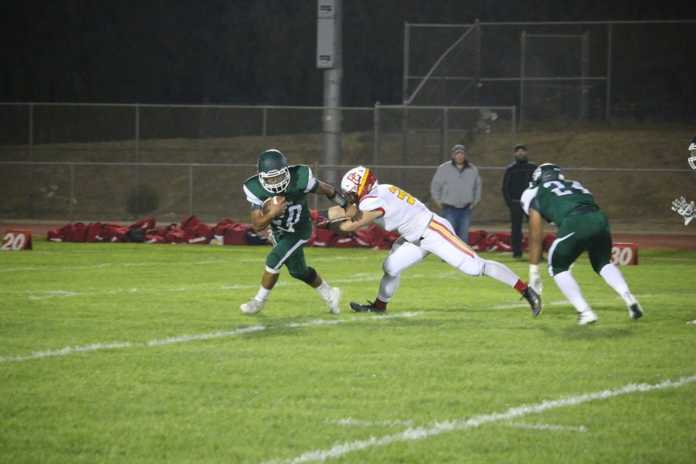 Bruins shut out by Breakers

GREENFIELD — The visiting Pacific Grove Breaker football team blanked the host Greenfield High Bruins, 23-0, on Friday to spoil the home coaching debut of Greenfield varsity head coach Adam Barsenas. The Breakers held a one touchdown lead at halftime then pulled away with 16 unanswered points in the final two quarters.

“We did a good job and stayed in the game,” Barsenas said. “Our team played tough and physical football. We got better from the jamboree and found out some guys can really play. In that sense it was a good pre-season game, but it would’ve been nice to get some points on the board.”

Pacific Grove took a 7-0 lead in the first quarter on a three-yard touchdown run by Anthony Da Silva. The Bruins struggled offensively but did make some strong defensive plays in the first half of play.

In the JV game, the Bruins dominated the Breakers, 52-7, to win their season opener. Ivan Torres scored four rushing touchdowns and caught one pass for a 58-yard score.

“It was a great start to the season,” said Greenfield JV head coach Adrian Trujillo.

“They (Bruins) played extremely well. We are still hoping to improve as they are still learning to play the game. The game this week with King City will give us a better look on how good our kids are.”

On Friday night the Bruin teams will host South County rival King City with games slated to kick off at 5 and 7:30 p.m.