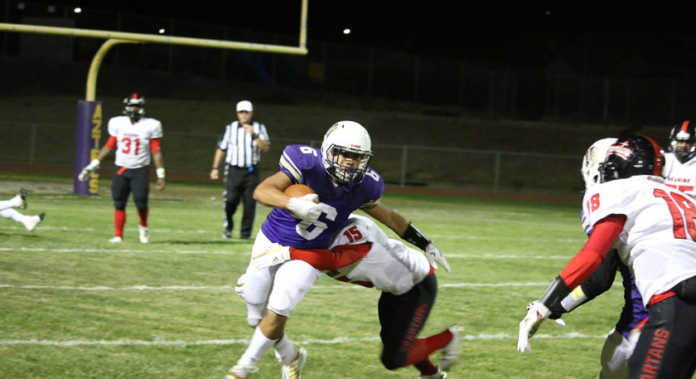 SOLEDAD — A balanced offensive attack by Seaside High wore down the host Soledad Aztecs in the season opener for both football teams. The visiting Spartans downed Soledad 31-12 with 444 total yards of offense.

“Turnovers and not being able to convert on third down when we were moving the football hurt us,” said Soledad head coach Frankie Berlanga. “We had a few muffed snaps and an interception that gave Seaside good field position. Our quarterback Gabriel Flores made his first varsity start and just has to get used to how fast the game is played at this level. Seaside has an athletic team with good size.”

The game began with the Spartans taking a 14-0 first quarter lead on touchdown runs of 52-yards and two-yards by running back Demarcus Hawkins. Soledad narrowed the deficit to eight points with a two-yard quarterback sneak by Gabriel Flores. Soledad missed the extra-point to trail, 14-6.

A one-yard touchdown run by Hawkins after a Soledad turnover helped the Spartans take a 21-6 advantage with 2:02 left in the first half. Seaside stretched the lead to 31-6 with a 13-yard field goal by David Cruz and a short-yardage touchdown run and PAT by Cruz with less than a minute to play in the fourth quarter.

The Aztecs used the running of Emanuel Ortega to set up their first score and the senior back scored on a nine-yard run to cut the Seaside advantage to 21-12. Soledad attempted but missed on a PAT to complete the game scoring.

Ortega ran for 139 yards on 29 carries as the Aztec run game produced 169 rushing yards. Hawkins led Seaside with 167 yards on 17 carries and ran for three scores. Spartan quarterback Ivan Ochoa passed for 188 yards and his leading receiver was De’Antae Williams who had six receptions for 94 yards. Defensively for Soledad Jaycob Olivas had 13 tackles, followed by Ulises Uribe with 10 tackles.

On Friday the Aztecs will travel north to Antioch to play the 1-0 Antioch High Panthers. Antioch opened the season with a 24-0 shutout victory over the Lincoln High School Trjoans.

“I had a chance to see a little of Antioch on film,” said Coach Berlanga. “They looked very impressive.”