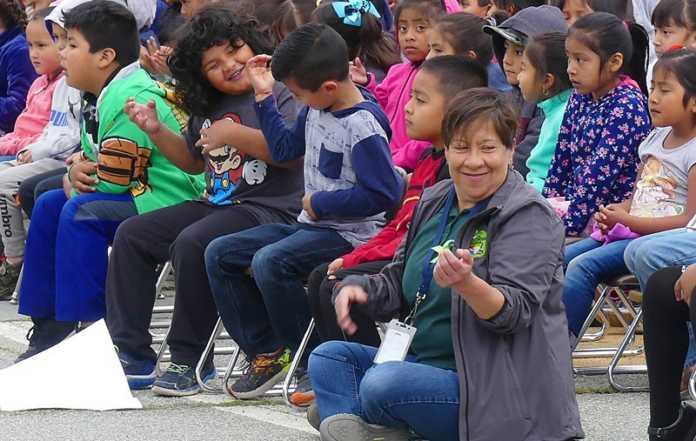 The assembly featured singing by different classes within the school and the Mary Chapa Rock Band.

“Our rock band is led by Daniel Salazar, our intervention aide,” said Vice Principal Michelle Farrer. “Daniel is an amazing musician and he is sharing his talent with kids from our school in grades fourth through sixth.”

The reason behind showcasing the Rock Band was to gain student interest in the music program next year. Salazar is the teacher running the Guitars Not Guns class. Mary Chapa Academy has partnered with the Guitars Not Guns organization, which has given the school 75 guitars this year.

“With the help of Daniel and the Monterey Arts Council, we have taught 75 students this year and put guitars in the hands of 75 students,” Farrer said.

Mary Chapa Academy is an arts-based school that is reflected in their vision statement, “Every student succeeds through artistic expression, creativity, and critical thinking.” The Rock Band performed two songs, “Pale Ghost” and “Tourette’s.”

In addition, the Academy has a new dance team formed this year by Pilar Mendoza. The team practices on Mondays and Saturdays for free.

Also during the assembly, student Natalie Luna read her poem about her dream to become successful and to live in a world with peace.

Arts Day featured a special performance from actors and dancers who were part of the “101 Dalmatians,” a spring musical put on by the Arts Leadership Team.

The group sang “My Beautiful Coat” from Cruella de Vil’s point of view.

A guitar and singing duo, The Journals, from Paso Robles, made an appearance at the Arts Day as well.

The school also has several art pieces created by its students on display in the new administration building breezeway.